There is a local highway construction zone where a stretch of cement barriers provides the charming experience of driving with about six inches of clearance on either side of your car. It reminds me of the ventilation shaft Luke Skywalker flew through to blow up the Death Star, only it’s twisty, not straight.

There are all kinds of signs warning “Caution!” “Reduced Speed Ahead” and “Speed Limit 35.” They’re the kind of signs that make construction-weary drivers say, “Here, hold my beer,” because it looks like you could fly through it at 55, until you realize you can’t unless you want to give your local body shop some business.

If you’re asking someone to hold your beer while you’re driving, you’re probably going to give your local body shop some business anyway. I'm talking about the funeral home.

So there I am, driving through it last week, thinking about bulls-eying womp rats in my T-16 (okay, seriously, I’m done with the Star Wars references) when something crawls across the lens of my sunglasses. I take them off while commencing through the ventilation shaft and discover . . . a TICK!

I generally don’t get excited about bugs unless they’re spiders in places they shouldn’t be (anywhere within a five mile radius of my person) but we’ve been so programmed to worry about Lyme and other tick-borne diseases, just seeing one launches an automatic GETITTHEHELLOFFMENOW reaction.

Without thinking, my left hand reflexively slammed down the driver’s side window button since my brain’s immediate solution was to chuck the sunglasses out of the car. This would have handily resolved the problem but since they are Ray Ban frames with prescription lenses, that seemed a little hasty.

My second reaction was to slam on the brakes and leap out of the car to dispose of the interloper. Since I was in a line of traffic, this was not a wise choice, either. Besides, those lanes are so narrow I'm not sure I could have even gotten the door open, and at my age, crawling out of the window Dukes of Hazard style is out of the question unless the vehicle is actively on fire. (Okay, NOW I’m done with 1970s movie and TV references. Promise.)

So I continued flying through the cement maze, trying not to go faster than the car ahead of me, which would have created a whole new set of problems. I had one hand on the wheel, one hand holding my glasses, one eye on the road and one eye on Mr. Tick, who was crawling merrily along as I plotted his demise.

No! Wait! Damn it! He'd disappeared. Where the hell did he go? Auuuuugh! Now he was on my hand! Those little suckers are like puppies and toddlers - they can move at the speed of light when they're going somewhere they shouldn’t. And they know you want to kill them so they’re not going to sit still and wait for it to happen.

I grabbed the offending arachnid (yep, arachnid‚—spider family, eight legs, count em, and I've mentioned how I feel about spiders) between thumb and forefinger, gritted my teeth and tried not to let the heebie-jeebies get the better of me. The only thing worse than a spider is a blood-sucking spider.

Now I’m driving with a potentially disease-carrying vampire bug clenched in my right hand. I’m sure that sentence alone would absolve me of any responsibility in case of a wreck but I’m not sure my insurance guy has forgiven me for the “A raccoon fell out of the rafters and knocked the outside mirror off my van” phone call from a few years back.

What happened next involved complicated hand-waving as if invoking an ancient spell, combined with prayer and some very bad language. I’m not a fan of multi-tasking but when push comes to tick, I have skills I wasn’t aware of.

I got the window down, kept the car cruising through the ventilation shaft without ricocheting off anything and forcibly ejected Mr. Tick out the window without sending my sunglasses with him. My biggest fear was the wind would blow him right back in, only this time he'd land in my hair.

I can only imagine what the construction workers thought when they saw a woman flinging her hand out the window while yelling, "Aaaaiiiieeeeee, be gone!"

Next week: back to our regularly scheduled puppy updates. Also known as the Red Demon Chronicles.

The arrival of Macallan Red

I always forget how small puppies are. And how much they know and how little they know at the same time. And how the presence of one in your house suddenly elevates any existing dog to absolute Ph.D. status because they understand tricky concepts like how doors work and how not make matters worse with the perpetually annoyed barn cat.

Introducing CedarWoods Macallan Red Label. His registered name is a departure from my previous literary-themed dogs and while I’m not a whisky drinker, it’s becoming a distinct possibility.

His call name is Raider. Not the Williamsburg Raiders (the hometown high school mascot). Not the NFL Raiders football team. More like Viking raiders, right down to the red hair and fierce attitude. The dictionary defines “raider” as a fast-acting military strike force or one who enters a property with the intention of stealing things. Check and check.

Lately, I’ve started to associate his name with old war movies where someone shouts “Air raid!” then all hell breaks loose. Cuz bringing home a puppy is kind of like that.

Raider came home to Iowa on Memorial Day weekend, the official start of summer. Summer puppies are great, right? It’s warm when you take them outside at 2 a.m., right? The night breezes are so soft and mild and it’s almost pleasant, right?

This year, we had a freak cold snap that saw frost and freeze warnings going out for our area the night Raid arrived. When he began rattling around in his bedside crate at 3 a.m., I shoved my feet into shearling-lined slippers, pulled on my flannel housecoat and out we went to answer the call of the wild.

I stood there shivering as 30-degree breezes swirled under my housecoat in a most unpleasant fashion. Taking time to pull on sweats before our sojourn had been out of the question. Puppy bladders come with a two-minute warning and a minute and a half of that is gone when they decide to let you know a flood is imminent.

The last few weeks have been a blur. The first thing competitive trainers want to do is start laying the foundation for that next showring superstar. While the delight of working with a breeder you trust to pick the right puppy for your goals ensures you’re ready to hit the ground running, the reality is that are about a hundred things the puppy has to learn about living with you, your spouse, your existing dogs, the barn cats and the ghost who lives in the attic. (I think the ghost left after getting bit on the ankle one too many times. Banner is ready to go with him and The Farmer is spending even more time outdoors than usual.)

I call this process “Learning How To Live In This House Without Killing Yourself or Causing Anyone To Kill You and Make It Look Like An Accident.” These lessons began the first night and will continue for the foreseeable future. 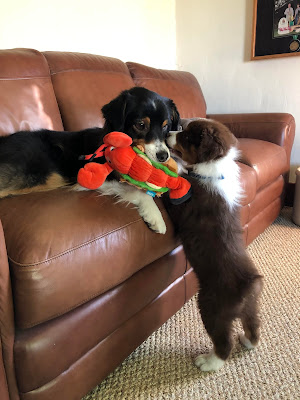 Important things, in no particular order, are: how to go in a crate and not scream bloody murder when you discover you can’t get out. How to navigate doors, which trust me, will always open from the same side each time unless the house gets hit by a tornado and then all bets are off. How to eat properly out of a bowl without swatting it with a paw, sending tiny kibbles flying around the kitchen and finally endearing yourself to your canine big brother who, until this point, thought you were a waste of fur.

How to refrain from playing with things that are not toys, including but not limited to the tablecloth, the water bowl, the carpet, the rug in the bathroom, the tablecloth, my shoelaces, my pants while I am wearing them, the water bucket and oh hell, I needed a new tablecloth anyway.

Banner finds him intriguing but mildly annoying since Raid can’t keep his teeth to himself. And Banner is too much of a gentle soul to put the smackdown on him. I limit their play time and referee as needed.

It has also come to my attention I am seven years older than the last time I got a puppy. This has given me more patience and clearer vision as the little red demon spawn and I set off on this journey. It has also reminded me that I am seven years older. I can still get down on the ground to play with a puppy, it just takes a little longer to get back up. And some things are non-negotiable this time—like my morning coffee. And possibly a wee nip of the banshee’s namesake. But not at the same time. Probably.