The other end of the leash

(Editor’s note: Against my better judgment, I’m letting Banner write this week’s post. He’s remarkably well spoken, although I’m a little chagrined to hear some of my own favorite expressions tossed back in my face.)

Seriously? On top of everything else I do around here, now I have to write a Thing. As if being the Executive Officer in Charge of Butt Wiggles and Master Sergeant of Alarm Barking wasn’t enough of a full-time gig. Being a Writer’s dog but doesn’t make me a Writer any more than dropping a cat in a stock tank makes it a fish. Not that I’d ever do that.

I’ve managed to wedge this writing Thing in between napping, eating stuff I’m not supposed to and barking at Things that aren’t there. If you want something done, give it to a herding dog. We can prioritize the hell out of a busy day. Maybe it will give Her more time for us to do The Things. 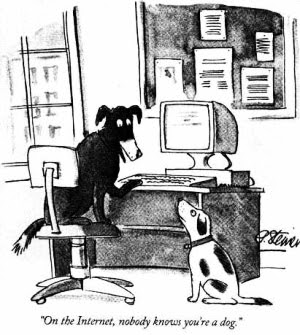 You know what I’m talking about, right? The Obedience Things? She says a lot of dogs don’t ever get to do them, that no one cares enough to teach them. Can you imagine that? The Things are like, life, man. There’s stuff every dog should know and then there’s stuff only special dogs are taught to do. Like we’re the elite canine special forces. I got your Tier One Operator right here, sweetheart.

Sometimes there’s food for doing The Things and sometimes there isn’t. I wanna know who the hell’s idea that was. No food? YOU work for free? Didn’t think so.

I love doing The Things with Her even when there isn’t any food (shhh, NEVER let the Humans know that - it's Item #7 in the Dog's Code) but ya wanna know what confuses me about the whole deal? I spend a lot of time picking up after Her. I mean, I thought this was a team sport and She loses shit like you wouldn’t believe. It’s always, “Banner, get it!” and “Banner, find it!” and then I have to go racing around, fetching stuff up She’s managed to lose AGAIN. It happens ALL the time. Some days I don’t know how She manages to get out of the house with both shoes on.

I’m gonna put that dumbbell on a rope and tie it to Her wrist. The minute She gets hold of it, she throws it away. One minute She’s holding it like it’s a Pulitzer Prize, next minute, yahoo, there it goes, sailing off into the wild blue yonder and ya know who’s gonna have to go get the thing no matter where it lands.

Same with those gloves. Three gloves. It’s always three gloves. She doesn’t have three hands. She doesn’t need three gloves. Maybe there’s a spare in case She loses one? That doesn’t make sense either, because She can’t hang onto ANY of them. What’s worse, She’s always giving them to other people and THEY can’t hang onto them either. Next thing I know, the gloves are gone and guess what? I gotta go get them back. It’s the same freaking mission over and over – different infil and exfil but same damn objective. Get the glove. Why does She want it back so badly after She gave it away in the first place?

She tells me which one to get and God forbid I bring Her a different one. Hasn’t anyone told Her THEY’RE ALL THE SAME?! I think She’s relatively bright, as far as humans go, but seriously – those gloves are all the same, no matter where they’re placed. Sometimes it would be so much easier just to veer off course a bit and fetch up the one that’s closer, with the thumb sticking up. Grab and go. But no. She wants the one the Cat’s sitting on.

Dumb stupid Cat. He shows up whenever we do The Things outdoors at home and he gets in the middle of everything. He sits on the gloves. He flops around in the pile of Find Its like he doesn’t have any bones. He's always sniffing around my supper dish, too, like he's done one damn thing to earn it. I don’t know what the purpose of Cats is.

If I’m not fetching things for Her, we’re Marching. Marching is okay. It pays really good. I know it’s called Marching because I’ve watched the TV and seen people walking in long lines. They all walk the same speed and turn at the same time and stop at the same time and no one ever goes faster or slower than anyone else. She calls it Heeling but I know it’s really called Marching and obviously Humans need to practice a lot because they’re really not very good at it.

Marching is complicated when you’ve got twice as many legs to keep lined up as the Human. I have to stay in the exact same place at Her side, no matter how fast or slow or crooked She goes, and whoa buddy, let me tell you, Marching brings out Her OCD big time. Let me put one paw out of place and She’s on me like a fat kid on a cupcake. 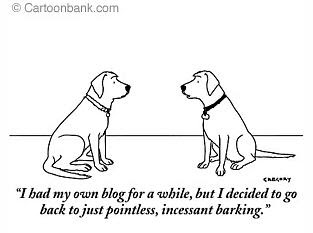 So get this – Her big thing now is to ask me, “Where’s your butt?” I bring her a glove or the dumbbell or a Find It and while I’m sitting in front of her, reminding her for the 487th time, that I was the one who did ALL the work while She just stood there, She’s asking me, “Where’s your butt?” I notice she never asks anyone else where THEIR butt is.

So when She asks, I play along and adjust my butt. I gotta tell ya, I don’t know what difference it makes but if I move it one inch to the left or two inches to the right, that seems to make her happy and I get crunchies and it’s all good. If I put my butt in the right spot in the first place, She gives me a LOT of crunchies right way but dang, when you’ve got a butt like mine, it’s hard to get the thing under control.

Okay, I’m done with this. I don’t want her thinking I did too good of a job or she’ll want me to do it all the time and I’m a busy guy. There are Things to bark at.