Of mice and closets

I cleaned out the bedroom closet last week. On the surface, this sounds like a mundane domestic chore but like so many things in life—including this post—it had the potential to be more complicated than it needed to be. But when you live in a century-old house with limited storage, it doesn't pay to let things get out of hand. 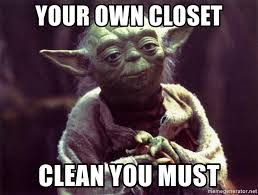 There is only one closet on the first floor of our house and I think its design owes more to accident than intention. The guy who built our house did a great job with the woodwork and built-ins but not so much with the closets. The one in question was made by walling off the space under the stairs to the second floor.

Our house was built in 1919 by a guy named Pete Maas. Peat Moss. Get it? Gardener humor. Never mind.

Anyway, I am pretty sure Harry Potter’s cupboard under the stairs was bigger than this closet. It has about twenty square feet of usable space. Unfortunately, it’s all vertical. There’s room for a few clothes bars in the middle, then each end tapers down to the floor, rendering the space usable only by people who like to crawl around on their knees. For the record, I am not one of those people. It resembles Harry’s cupboard in a lot of ways, although there aren’t any spiders. There are occasionally mice. 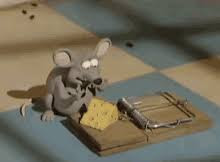 When Phoenix was alive, one of his greatest gifts was telling me when there was a mouse in the mousetrap. I don’t know about the rest of you, but of all the things that need to get done in the course of the day, checking mousetraps doesn’t always make my top 10.

If you have a mousetrap set anywhere in your house, it is in your best interests to check it regularly.

If you do not, one day you will open your closet and the nauseating waves of dead mouse stink that come rolling out will knock you into next week. It will take every ounce of fortitude you possess to venture into the closet, one arm clenching a flashlight and one hand clamped firmly over your mouth and nose because if you inhale you might barf and there is no way on God’s earth you want to spend any more time in this confined space with this tiny dead thing that stinks like a freaking week-dead 1,200 pound steer laying in the sun at high noon in Iowa in July. (Brief aside – I DO know what that smells like, thanks to the derecho of 1998. But I digress.)

Mice do not go gentle into that good night. In the process, they drag the trap about two feet from where you set it, usually behind or under something. And this is where they will proceed to get a stink on.

Phoenix always told me before that happened. For almost 11 wonderful years, I did not have to check the bedroom closet mousetrap because Phoenix would tell me when there was a mouse in it. He would bounce up and down in front of the door, an expression of absolute delight on his face, like he’d just done the most wonderful ever in the existence of wonderful things.

Banner does not share the same enthusiasm for rodent patrol unless the trap is in plain sight. If he and I get a visual at the same time, it’s game on and a mad rush to see who can get there first. It’s winner, winner, mouse for dinner if he beats me.

But traps behind a closet door? Meh.

As a result I occasionally find myself getting knocked on my butt when I open the closet and get a reminder that A) this house is over 100 years old B) the foundation is not mouse-tight and C) for the love of God, check the damned mousetrap. Meanwhile, Banner looks at me like, “Ewww, gross, that stinks. Can I eat it?”

And now I’m out of time for this week. See what I mean? A closet-cleaning post shouldn’t be complicated but here I’ve written one and the whole thing was about dogs and dead mice. I’ll try to finish it next week.