You can't get there from here

Apparently if left unattended, I keep wandering away, finding things to do that are not blogging, until friends get on my case about it.

This time, I’ve been gone long enough for this:

To grow into this:

With that in mind, I should be writing about puppies (especially the crazy red ones) but today’s topic is the I-80/380 interchange project near Iowa City. It's been under construction since forever and shows no sign of being completed any time soon.

To give you an idea of the scope of the project and its impact on the surrounding communities, the dang thing has its own Facebook page. Go to I-80/380 Systems Interchange and you, too, can play the never-ending game of “Where will this lane of traffic take me today?”

Here’s an overview, copied directly from the Iowa Department of Transportation (IDOT) website (motto: Iowa, come for the corndogs, stay because you can’t figure out the detours to get home):

Got that? There will be a test.

Essentially, it means when all the new roads and ramps are built, there will be 49 lanes of traffic going 16 different directions at 70 mph (pending weather and Hawkeye home games). That isn’t a whole lot different than what’s there now, except the element of yee-haw merging should be eliminated.

If you’re not familiar with yee-haw merging, it’s what you get when you’ve got traffic entering and exiting at speeds anywhere from 40 to 80 mph over about a 200-yard stretch of roadway, often in a manner that defies numerous rules of physics, namely the one about two objects not being able to occupy the same space at the same time. Motorists range in skill from your 90 year old grandma to people who are graduates of the Dale Earnhardt Jr. school of driving.

Yee-haw will not be the only words you use.

Remember the scene in Star Wars: A New Hope (the original blockbuster that knocked everyone on their collective butts in 1978, sorry my geek is showing and I don’t care) where Han Solo is yelling to his co-pilot to make the leap to hyperspace and yells, “Punch it, Chewie!”

Well, merging from I-80 onto I-380 or vice versa is something like that. No matter which direction you go, or what time of day it is, there will be another vehicle performing the opposite function, which means you are going to end up in one another’s lanes.

This is because the geniuses at the DOT made the exit lane and the entrance lane the same lane, providing an approximate 20 foot allowance for vehicles to pass while drivers grit their teeth and their passengers quietly have heart attacks. I’m sure it seemed like a good idea at the time.

The original cloverleaf was designed decades before the Iowa City/Coralville/Tiffin/North Liberty communities began growing at about 300% a year and everyone started driving two cars at a time.

Which is not possible, but neither is sharing the same entrance/exit lane with an 18-wheeler with the pedal to the metal and let me tell you, sister, I’ve done it.

And if anyone can explain what auxiliary lanes are, I’ll be glad to listen.

In the meantime, it’s a new adventure every day. At one point, I counted 17 construction cranes in a two-mile stretch of I-80. SEVENTEEN! Amazing. What’s even more amazing is that I didn’t crash into anyone while I was counting.

This eternal construction zone is about 20 miles from where I live, so I get routed through it on a regular basis to get to important places, like dog shows. I can deal with the fact there are now only two lanes where there used to be three and one lane and a nasty-ass looking cement barrier where there used to be two and what used to be the safe center lane is now an exit that will send you winging off to Cedar Rapids when you least expect it. Not that Cedar Rapids isn’t a nice place this time of year. It’s not under water anymore and they’re mostly done picking up wrecked trees and houses after that pesky derecho.

But then the DOT starts pulling this business:

“Beginning this morning, the westbound I-80 exit ramp to northbound I-380 will shift to the west. Drivers can now expect to access the exit ramp ½ mile west of the previous exit location. This change is anticipated to be in place until Summer 2022.”

Stop moving exits around like they’re staircases at Hogwarts. I just figure out where they’re hiding amidst the cement barriers and orange barrels and barricades warning “EXIT CLOSED” and trucks with signs on the back telling me not to follow them into a construction zone—while the entire western half of Johnson County is a construction zone—and a dozen more signs telling me to yield, merge, shift lanes, reduce speed and prepare for the Second Coming and then you go and move the bloody exits! You’re messing with my mind and it’s enough of a mess already. I don’t handle change well. I’m Lutheran. We had the Reformation in 1517. That was enough. 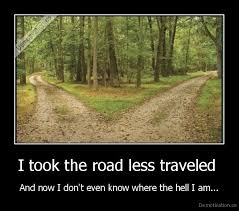 The degree of consternation this has caused local drivers is surpassed only by folks who are passing through our fair state and are totally unprepared for the havoc being wrought. Not to worry, Iowa drivers keep an eye on those out-of-state license plates

and since we’re “Iowa nice,” we’ll let ya’ll folks from California and Maine and Florida cut right in because honestly, we just got our cars back from the body shop after a run-in with Bambi and we don’t want to do it all over again.

Until then, punch it, Chewie.

Posted by Melinda Wichmann at November 06, 2021